Not a condition that is simple or one that doesn’t cause problems, millions of Americans suffer from a fear of needles. The fear of pain or injections, along with the drawing of blood, can happen to those who have had to spend much of their life getting shots, or even those who have had very few shots. Fear of needles can keep people from important appointments, hinder them from following through with proper medication, and hold a patient hostage to their own worries in many ways. This article from The Specialty Pharmacy Times outlines some very important points about needle phobia, and gives a bit of valuable insight about how to cope with it. 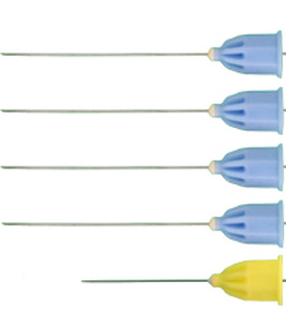 Important factors to consider with fear of injection

A very well thought through study explored some of the reasons why people develop the phobia of needles, to dig deeper into this occurrence that can keep someone from being entirely healthy. If an individual becomes diabetic later in life, they will absolutely have to get over this fear, because daily pricks and draws may become the new norm for their existence. One study showed that this fear can be hereditary; if relatives or anyone in generations before you have experienced it, you may as well. 24% of those surveyed about the reasons why they have needle phobia during 2010 claimed that it was because they saw a sibling or someone close to them have a very bad experience while getting injected. This makes sense, as we don’t like to see the ones we care about suffer.
Some of the cases of this phobia are so intense that the patient may even lose consciousness, even for periods of a few hours. Those who suffer from the most severe kinds of needle phobia have even reported being weak for a few days after having to be injected, or even after the potential or thought of being injected arises. When someone begins to have a very heightened heart rate because of their needle phobia, it usually subsides after a few hours. The fear of things like blood tests and injections can really interfere with someone’s entire life and the ways in which they receive healthcare, and it becomes a personal burden of the most intense kind. In some circumstances, court ordered blood tests have even had to wait when the patient has a needle phobia of the most severe kind.

Some of the symptoms of needle phobia 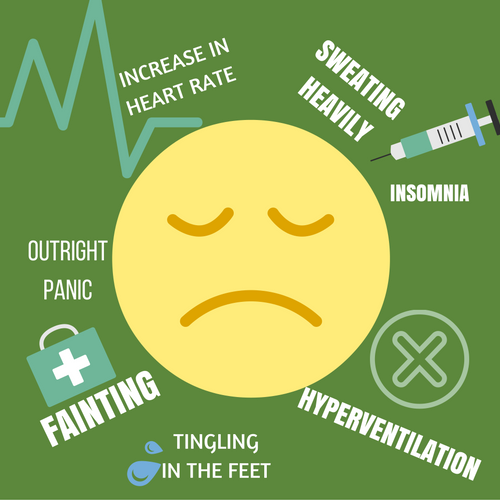 These are some of the physical symptoms that may occur when the patient is realizing they will be injected soon, or even if they are fearful of an injection or needle encounter that may happen within the next day or two. There are many things that can happen during an all out needle phobia attack, and it can be a very definitely harrowing and frightful experience.
• Fainting
• Sweating heavily
• Noticeable increase in heart rate
• A sudden increase in blood pressure followed by a drop
• Insomnia
• Resisting the needle at all costs, even grabbing arms of Nurse’s and aides
• outright panic
• hyperventilation
• Tingling in the feet

Other insights regarding needle phobia

After gleaning the web to find information about this condition, we found this article from healthcentral.com that provides some other information that has been gleaned over the years regarding the fear of needles. It really stresses the fact that for a positive outcome for someone who has a needle phobia, clear communication on many levels is the key. When you are very honest about your fears with a professional who has seen many others in the same boat, both parties will benefit immediately, and build a connection that helps them learn more. Besides, if you are looking into getting married in the near future or have a baby, you are going to want to take steps to minimize your fear of needles.

1. Lying flat on the bed: This technique will help if the patient’s blood pressure experiences a drop due to the phobia, and it will seem much more comfortable to some than sitting up where they can look right down at the arm that is getting ready to be shot up or have blood drawn from it.
2. Devices that could make a difference: There are devices available on the market now that transmit vibrations that have been proven to reduce pain. The use of some of these have been successful in a nearly complete turnaround of the phobia, because the stimulus to the nervous system minimizes the negative effects that patient dreads.
3. Forms of therapy: Some therapy such as desensitization gives the patient a very controlled dose of the needle or simply being around the feared device, and helps them work through their long term and deep seeded issues.
4. Relaxation techniques: These very powerful weapons that can be used against the phobia are worth their weight in gold. Some of the best ways that have been devised to challenge negative thoughts that arise in the patient’s head when thinking about needles
5. Hypnotherapy: It has been proven in a couple different of cases that this can help greatly with the patients who have not responded to other avenues. Even though many think it doesn’t work, amazing things can come about in your willpower and subconscious when a professional evaluates the situation and gives you help of this different blend.
6. Substances that provide relaxation: Even though some think of it as a last result, medications like Valium and Xanax have such sedative properties that some with the most severe needle phobias can benefit from their use before an episode. It’s not a good practice to take subustances like this every time you have to have an injection, but if it helps the patient is having the worst of panic attacks.