This is known as a problem in the way in which the upper and lower teeth fit together during chewing food and biting. The definition of the word means “bad bite”, and is also widely referred to as cross-bite and overbite. Speech, the appearance and ability to eat can all be affected by malocclusion.

When patients are growing up and going through their adolescent years, this can be the source of much embarrassment. Things such as serious acne can be even worse and psychologically painful, but malocclusion has enough of an effect on appearance to render a young person or adolescent a large source of discomfort.

Some milder types of malocclusion may improve as a child’s jaw continues to change and grow. The size and position of the jaw, or tendency to display an under-bite, may not improve.

Even after some forms of orthodontic treatment, the teeth have a normal tendency to actually drift towards the front of the jaw.

How is malocclusion diagnosed?

This condition is usually discovered during routine dental examinations. The contact of the teeth when the patient bites down is watched closely, and sometimes coated paper is used to leave colored marks at the points of contact. After this, if the dentists suspect that there is malocclusion, x rays and photos can be taken to decide if this is the case.

What are some of the causes of this condition? 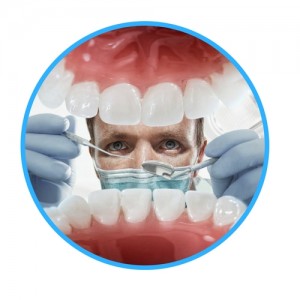 Like many tooth misalignment conditions, habits like thumb sucking and using a pacifier along with a bottle in later years are some of the other causes.

Accidents that can happen while biking, rollerblading, and during many other action sports, and these fractures can mis-align the jaw, causing problems.

Retainers and braces that were not fitted quite right, teeth that have come in as extras, and issues such as tumors of the mouth and jaw can also have a bearing on the form of teeth and lead to this condition.

There are also different categories of malocclusion:

Class 1 is the most commonly found: the bite structure is normal, but the upper teeth slightly overlap the lower teeth when in form.

Class 2 malocclusion is called retrognathism or overbite, and this is seen when the upper jaw and teeth severely overlap the bottom jaw and teeth.

Other symptoms of malocclusion

Just like any dental condition, there are many numerous ways in which you can detect what is happening. There are always a few symptoms that are tell-tale or right in front of you, and a few that can fly a bit under your radar. Here are some of the other symptoms of malocclusion: 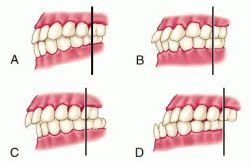 Even though there is a very few number of people who have perfect teeth alignment, when it comes to malocclusion, you may definitely have a referral to an orthodontist. Basically during treatment procedures, the goal is to eliminate strain on the teeth, jaws, and muscles. It can greatly lessen the risk of a tooth breaking, and will reduce symptoms of other joint disorders. 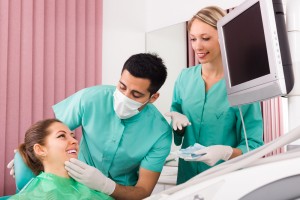 During treatment using braces, metal bands are placed around some teeth, and plastic bonds are attached to the surface of the teeth. Wires or springs will then apply force to the teeth, and gradually provide alignment.

In some cases, removal of one tooth may be needed, because it will ease the crowding of the mouth. Don’t worry if you are one who tends to have dental anxiety, as there are many sedation dentistry options for this procedure, and the tooth will soon be out quickly.

Sometimes techniques such as caps or adjusting existing teeth are used: reshaping the tooth can help the overall malocclusion, and make for a much fuller and brighter appearance during a smile.

Reshaping by surgery can do a great deal to lengthen or shorten the jaw, and wires or screws may be used to stabilize the jaw bone. This is not as frequent an option and involves the same type of procedure that would take place if someone had injury to the jaw; it can make a great difference and is a good option for those in their teen years.

“Proper occlusion is one of the most important and fundamental concepts in oral health. When teeth fit together improperly, there are numerous consequences both short and long-term. The short-term consequences include compromised aesthetics as well as inability to chew and speak with maximum efficiency. The long term consequences of malocclusion are teeth that are harder to keep clean, teeth more prone to breaking and chipping, and increased likelihood of periodontal disease.”