Many people all over the globe know the dangers of drinking. When it comes to alcohol, there are simply times when overdoing it will lead to bad health. Liver problems are one of the bad things that heavy alcohol consumption can lead to, as well as flat-out addiction.

In many European nations, there is a bit more normality to beer and alcohol consumption during the day, and the lines become a bit blurred when looking at the number of drinks people have. When it comes to beer, we know that it is fattening and may not help too much with your weight loss plan, but that it also may be good for those preparing to breast feed.

While most sensible drinkers understand that downing a very high quantity of beer is going to lead to multiple health problems, more and more benefits of the tasty suds have had light shed on them with more research being done. Many out there think that “tipping a bottle to your health” is just a saying that may not hold that much weight, but here we will look at some aspects of beer that are positive for your teeth.

Within the realm of long-term health and your teeth, one of the benefits of beer for is that it provides a serious offensive battle against biofilm, the coating that builds up on your teeth between every brushing. There is harmful bacteria on the surface of your teeth that can quickly promote decay, and eventually, leads to gingivitis and periodontal disease.

If you tend to like the hoppier beer such as IPA and pilsners, they contain tannins, which have antioxidant properties that inhibit the growth of the bacteria responsible for causing plaque. They really do help to keep your teeth cleaner, and in the long run, can do a great job of protecting the health of your gums. 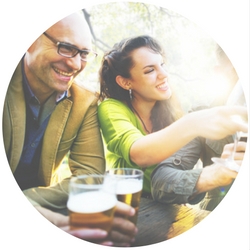 The calcium and silicon in beer are good for teeth, nails, and to provide body and longevity to hair as well. Beer should not be the main source of calcium for anyone, but having the occasional pint can help your teeth and bones stay strong in the long run, and extend their life by leaps and bounds.

You can occasionally enjoy lager, but make sure you stay hydrated: alternating to water while you are partaking in the boozier side of what drinks have to offer will contribute to the healthy balance enough so you can wash away acids. Chewing sugar-free gum is a great way to increase saliva’s flow in your mouth, which will help greatly if you have been enjoying hefty visits to the brewer’s wares.

It is not just within the dental realm where the occasional bottle of cheery goodness can give you a boost: it can lower your risk for hypertension: there have been studies proving that moderate beer drinkers are much less likely to develop high blood pressure than those who partake in wine or hard liquor. Even though some may not think this at first, another study placed 40 men watching a movie while completing puzzles.

The men who were drinking beer during that study solved the problems a few seconds faster than the one’s who didn’t. It should be kept in mind that this is always in moderation: after about 3 drinks, the findings of this particular study won’t hold much weight!

Those researching the heart in Italy discovered that moderate beer consumption created a 42 percent lower risk of heart disease, compared to those that did not partake in beer or any alcohol. This study even showed upping the intake to two pints daily was still in a healthy region, where the patient did not encounter negative effects from drinking.

A Dutch research team discovered that over a 4-year span, they were much less likely to develop type 2 diabetes, a serious killer throughout Europe as well as the United States. Beer has also been shown to lower the activity that produces cataracts, and even lowering the risk of developing painful kidney stones by 40 percent.